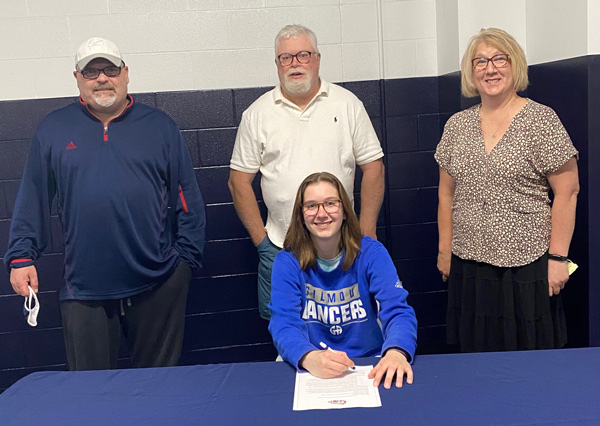 She was not expecting the offer from Post University when the team reached out to her in late May to offer her a roster spot. She visited the campus and liked it immediately.

“It’s a small school, everyone seems friendly and it has a really nice rink,” she said. “I’m not entirely sure how they knew about me but we had a lot of college scouts attending our games and I do have a profile page on the NCSA (Next College Student Athlete) website. But I was very excited to get that call!”

Delaney became interested in learning to play hockey after attending Blue Jackets games with her family who are season ticket holders. Her brother Alex, currently a Chiller hockey coach, and she took several skating and learn to play classes at OhioHealth Chiller Easton before she joined the Easton Youth Hockey Association as a Squirt at age 10.

After three years of house hockey at EYHA, a then 13-year-old Delaney made the Columbus Chill Youth Hockey Association girls u16 team playing with mostly teammates a few years older than her. The following season she made the Cleveland Barons Tier 1 u14 team and then the Gilmour Tier 1 u16 team the season after that. During her junior year at Pickerington North High School Delaney rejoined the CCYHA u16 team before she enrolled at Gilmour for her senior year of high school.

Delaney considers herself a “physical, offensive defenseman.” She says maybe her biggest strength is her ability to see the ice which allows her to quickly understand how plays are developing. She credits her father Bryan and local coach Darcy Cahill as the key people to her development as a player and earning this opportunity to play college hockey.

“My dad was very supportive, he drove me everywhere, watched me all the time. He was a hockey player back in the day so he knows a lot about the game and would coach me about what I needed to work on.”

As far as Coach Darcy she said, “Thanks to him I grew up spending so much time on and off the ice helping out with practices and clinics. He really gave me so many opportunities and coached me in the right way to do things.”

Along with her parents Bryan and Cindy, and her brother Alex, Coach Darcy is also thrilled with Delaney’s letter signing this week.

“Early on Delaney was unsure if she had what it takes to play college hockey and I think that’s how most kids feel. But she always kept her head up, worked hard and earned this opportunity. We’re all just really excited and proud of her!”

Delaney is looking forward to joining her new team in late August. “The thing I’m most excited for is the chance to play high-level college hockey while experiencing college life at the same time!”

Way to go Delaney, the Columbus hockey community is proud of you and can’t wait to see what you do next!