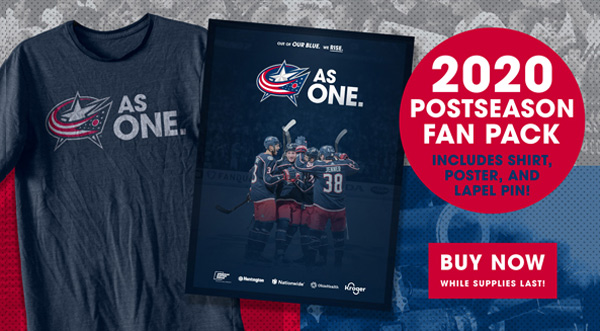 COLUMBUS, OHIO – With the official return of the 2019-20 National Hockey League season, the Columbus Blue Jackets announced today the launch of Out of Our Blue. We Rise. As One., the team's 2020 postseason campaign, presented by AEP, Huntington, Nationwide and OhioHealth.

The Blue Jackets are one of 12 Eastern Conference clubs that will compete at Scotiabank Place in Toronto as Columbus will face off against the Toronto Maple Leafs in a best-of-five Qualifying Round series beginning on Sunday, August 2. Although the playoff atmosphere will be different than in years past, the excitement of competing for the most storied and hard to win trophy in professional sports, the Stanley Cup, has not changed.

The bond between the Blue Jackets and their fans, The 5th Line, is special. It has been an integral part of the club’s four consecutive appearances in the postseason and will help drive the club during the months-long quest for the Stanley Cup. While nothing can fully replicate such an emotional experience, fans can show their support of the team by using the hashtag #CBJAsOne when posting throughout the postseason.

For the latest news and ways to stay engaged with the club throughout the postseason, fans can visit www.bluejackets.com/AsOne.